Global icon Priyanka Chopra’s weekend is all about going out and about with her girls and pawsome friends in Los Angeles. Recently she took to her Instagram handle and dropped a series of pictures from her ‘Soul Sunday’ where she is seen in her off-duty look in pink athleisure and braids as she took her pet dogs out for a walk with her friends.

In the next picture, Priyanka is also seen hitting an eatery in the town with her friends as all of them enjoyed Korean barbecue seemingly. Sharing the post, she wrote in the caption, “Soul Sunday with the girls. And pups 🥰 🐶 ✅❤️☀️.”

She also dropped a hilarious video of herself from the day and added for the fans to answer, “Do u think shaking after u overeat will make room for more.” Here’s a glimpse: 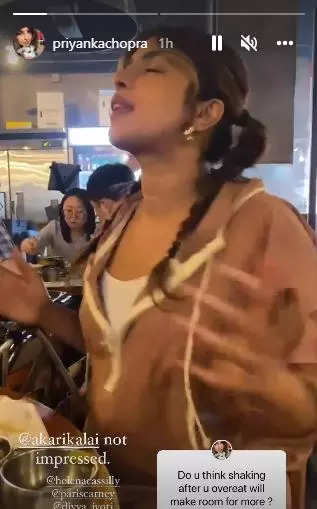 Priyanka who has been maintaining a low profile ever since she welcomed her first baby with husband Nick Jonas via surrogacy, also had posted a sunkissed carfie recently. Looking stunning as always, she was snapped in a simple look that included a white shirt, golden accessories and a messy hair bun. It read, “Just here.. Gettin’ thru”.

On the work front, Priyanka Chopra is currently awaiting her next ‘Text For You’. She also has an adaptation of Shilpi Somaya Gowda’s novel ‘The Secret Daughter’ where she will be sharing screen with Sienna Miller.

While she has already completed the web series ‘Citadel’, she will next star in Farhan Akhtar‘s directorial comeback ‘Jee Le Zaraa’ alongside Alia Bhatt and Katrina Kaif.