Shahid Kapoor starrer ‘Jersey’ has hit the screens today and the actor is receiving a lot of praise for his performance in the sports drama. After watching the film, Kiara Advani praised her ‘Kabir Singh’ co-star and wrote on Instagram, “My dearest SK, you are just tooooo special ya, watching you as Arjun has been nothing short of magic, you hit it out of the park and how , as Jersey releases tomorrow my best wishes to the entire team, @amanthegill, the loveliest @mrunalthakur, the finest of them all, @officialpankajkapur sir and the captain of their ship @Gowtamnaidu for this beautiful film.” 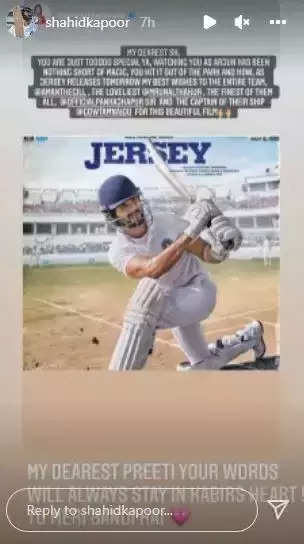 Replying to Kiara’s message, Shahid referred to her popular character of Preeti from their film ‘Kabir Singh’ and wrote, “My dearest Preeti your words will always stay in Kabirs heart Tu meri bandi hai.” ‘Jersey’ is a sports drama directed by Gowtam Tinnanuri, who had also helmed the original Telugu film.

Beyond films, Shahid Kapoor will also venture into OTT soon. He will be seen essaying the lead in an untitled series, created and written by Raj Nidimoru and Krishna DK of ‘The Family Man’ fame. Speaking about his digital debut, Shahid had stated, “I’m very nervous about making my digital debut because I really feel that actors who might have been liked and loved on the big screen, might or might not be appreciated on a digital platform.”