Kareena Kapoor Khan shares an adorable pic with her ‘heart’ Jeh; The actress poses with Karisma and Karan Johar in THIS inside pic

Ranbir Kapoor and Alia Bhatt are now married. The duo tied the knot in an intimate ceremony which was held at Ranbir’s house Vastu. The entire Kapoor clan was seen attending the wedding ceremony. Amongst everyone, Kareena Kapoor Khan and Saif Ali Khan made a striking appearance as they twinned in pink. After the wedding, Kareena took to Instagram to share a gorgeous picture with her baby boy, Jeh Ali Khan. 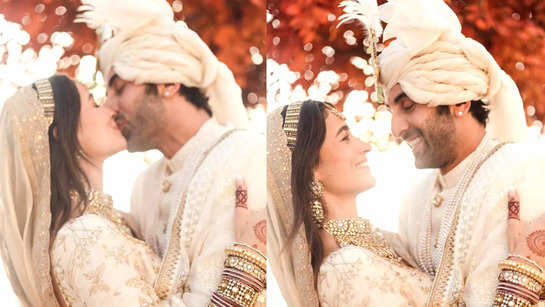 Saifeena’s kids, Taimur and Jeh were also seen sporting ethnic outfits as they made an entry at mamu Ranbir’s wedding. Bebo and her little one Jeh were seen twinning in pink. In the picture, Bebo is seen happily looking at Jeh, while he is seen flashing his million-dollar smile. The picture also features the beautiful floral decoration from Ranbir and Alia’s lowkey wedding.

Earlier, Manish Malhotra also shared an inside picture of Bebo, Karan Johar and Karisma Kapoor on his Instagram handle. All of them looked stunning in their ethnic outfits. Along with the picture, Manish wrote, “My all time favourites forever 💕💕.”

Meanwhile, Ranbir and Alia are expected to make their first appearance as husband and wife in a while now outside Vastu. The newlyweds were seen doing a photoshoot soon after tying the knot. The first blurred glimpses of the couple got their fans super excited.