Bhool Bhulaiyaa 2: Here’s what Kartik Aaryan has to say on being compared to Akshay Kumar | Hindi Movie News

Kartik Aaryan has stepped into Akshay Kumar’s shoes for ‘Bhool Bhulaiyaa 2’, which is a sequel to the latter’s 2007 hit. At the film’s trailer launch, Kartik fielded questions about being compared to Akshay. He said, “I didn’t want to compare his role to mine, his was too big and it shouldn’t be done. But I had loved him in ‘Bhool Bhulaiyaa’. I have grown up watching him, we all have, so it is better than we don’t compare.”

Praising Akshay Kumar, the actor added, “I love him as an actor. I think what we have tried as much we could do on our own. Ofcourse the title is same, a few things will create nostalgia about the first movie but there are a lot of new things too, which I hope people will love. It’s a whole new dynamic world with what we have created with ‘Bhool Bhulaiyaa 2’. There will be comparison but I hope that ‘Bhool Bhulaiyaa 2’ is also remembered as a unique movie.”

When director Anees Bazmee was asked if the sequel will feature Akshay and Vidya’s characters from the first part, the filmmaker had quipped, “Akshay Kumar is a great actor and we share a good friendship, Vidya and he did not fit in the script. It would have been profitable to work with them, but the script did not have any such opportunity. All characters are fresh except for Rajpal Yadav.” 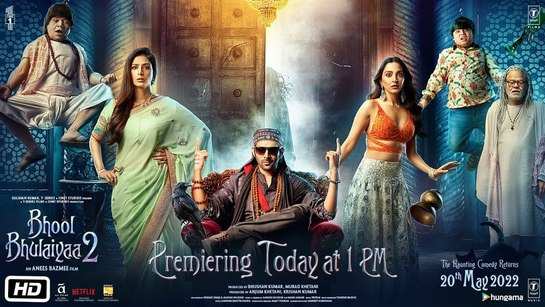