Bollywood actress Anushka Sharma is all set to hit the field for her upcoming ‘Chakda Xpress’ as she will be filling in the shoes of Indian fast bowler Jhulan Goswami. While she will be soon heading out to shoot sequences at top cricket stadiums, she has decided to beat the heat with the patent Bengali summer delight Panta Bhat aka the overnight fermented rice congee.

On Monday, she took to her Instagram handle and dropped a glimpse of her lunch platter featuring panta bhat alongside mandatory side dishes. Sharing the picture, she added a drooling face emoji. Have a look: 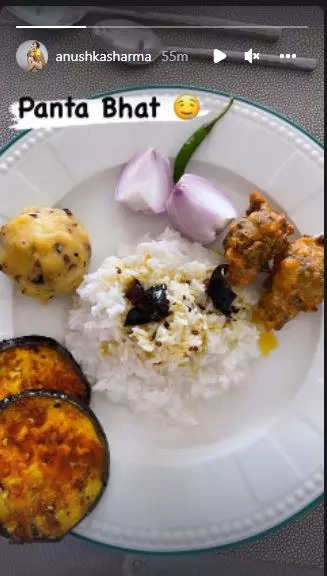 Meanwhile, sources had revealed that Anushka is likely to begin her shooting at top stadiums in UK, including Lord’s and Headingley stadiums. While she is also in talks with Indian stadiums, sources shared, “Yorkshire County Cricket Club have just announced a new sponsorship deal with Karnesh Sharma’s Clean Slate Filmz, which will take over as principal sponsor at Headingley for the 2022 season. So, it’s certain that Anushka will shoot at this iconic stadium. Plus, given Jhulan’s cricket trajectory, Anushka is expected to shoot at Lord’s and at a few other big world cricket stadiums. It looks like she will travel to at least 4 big stadiums for the film!”

“Anushka’s films have always been mounted on a big scale. Karnesh and Anushka want Chakda Xpress to become a definitive biopic based on a female sportstar. Thus, no stones will be left unturned to ensure that her doing Chakda becomes a huge talking point for audiences worldwide. This move definitely indicates that intention and also gives a promise that a big film is coming from Anushka that will have scale, patriotism and the message of equality all rolled into one,” they added.